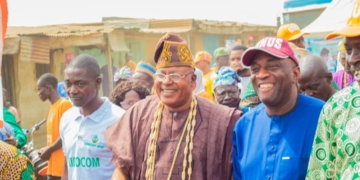 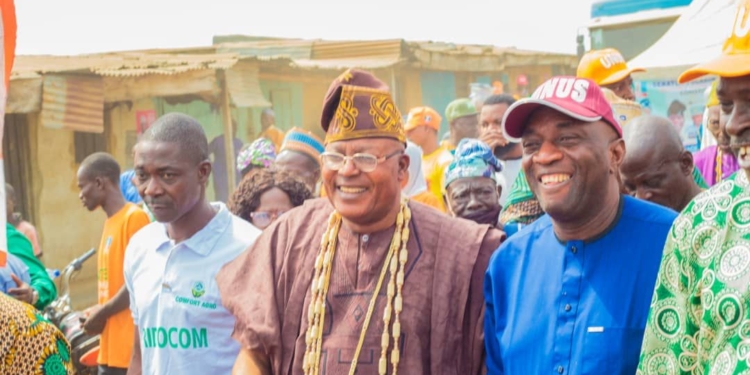 After many years in darkness occasioned by a faulty transformer, residents of Akinyele cattle market, Oloro, Ekeosiun, Ajobo and other communities can now heave sigh of relief as Dr. Yunus Akintunde, candidate of the All Progressives Congress (APC) for Oyo Central Senatorial District, has provided, installed and energised a 300 KVA 33/0.4KV transformer for their use.

On Tuesday, members of the benefitting communities trooped out in their hundreds, to receive the Oyo-born politician who was in the area to officially commission the facility for the use of the people of the community.

Leaders of the communities, who took turns to commend the former Commissioner of Works, said he has brought smiles to their faces with the transformer. They added that they would continue to support him and his party.

The Alakinyele of Akinyele, Oba James Olubayo Odeniran, who was obviously elated by the gesture, thanked Akintunde for his efforts.

“We are glad that this is happening. We never knew it was going to be this quick. We have suffered for long. Those who have businesses here were the worst hit. They hardly could do anything when we had no light. Since the last few days that this transformer has been energised, we have been grateful to God. We thank Dr. Yunus Akintunde for this gesture and like my people have promised, we will support his aspiration. We know with what he has done, he would do more when elected as senator of our district,” the monarch said.

The representative of Sarkin Hausa and Fulani, Alhaji Morufu Salawu, corroborated Alakinyele, adding that “only Allah can repay you for what you have done.”

“This place was like hell at night. I cannot even describe how it was. Only few people who have power generating sets assisted us with charging of phones and others. It was a terrible experience. We thank Dr. Yunus Akintunde for coming to our aid,” he added.

Speaking on why he decided to assist the community, Akintunde, who was accompanied by the deputy director-general of the Bola Tinubu/Teslim Folarin campaign council in Oyo State, Barr. Yemi Aderibigbe; a party leader, Hon.Yinka Folarin; APC State Secretary, Alhaji Tajudeen Olanite; senatorial chairman of the party, Dr. Joshua Oyebamiji; two-term former lawmaker, Hon. Murphy Adigun as well as candidate of the party for Akinyele/Lagelu Federal Constituency, Hon. Akinmoyede Wasiu Olafisoye; candidate of the party for Akinyele state constituency II, Wasiu Kareem (KK) and others, explained that as someone who is an expert on energy, he knows how lack of it can cause poverty.

“I know much about energy. In fact, I did my Ph.d at the University of Ibadan on energy and environment studies. I am even the first Ph.d in that field. When I heard about the plight of the people, I felt sad. I knew what they would have lost. Almost everything you want to do depends on energy. I did all within my power and here we are today. I am grateful God used me. This is not my first time, this is not my first intervention. There is no local government in the senatorial district that I haven’t touched, none. In fact, I have done things in Oyo South. And when I was doing most of these things, I never knew I was going to be contesting. That is to tell you that if you cast your votes for me and other APC candidates, we will do more. We thank you for allowing us alleviate your sufferings,” Akintunde who has been dubbed tanna-tanna, because of the ways he has lit up many Oyo communities with solar street-lights, added