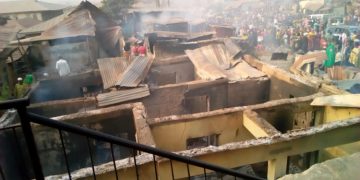 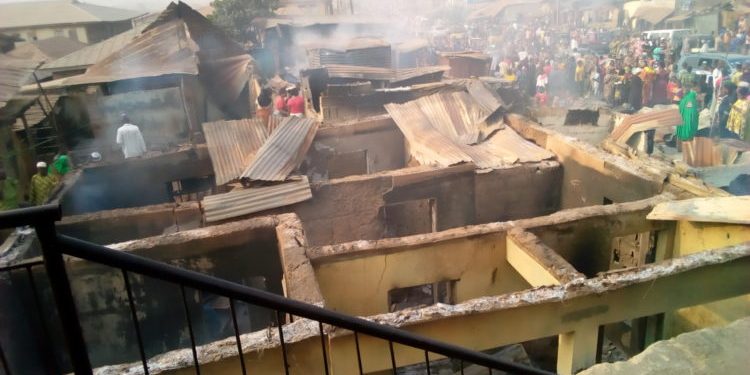 Some unknown hoodlums have wreaked havoc in Idi Arere area of Ibadan, the Oyo state capital. In the early hours of Sunday, they razed more than 30 houses including shops. Apart from houses, they also destroyed vehicles and structures along the Bode-Idi Arere-Ojo Oba axis.

Beer parlours, electronic stores, fashion designer shops and shops of clothing material dealers were among the shops torched with property worth millions of Naira either looted or destroyed. The destruction occurred on both sides of the road from the junction and stopped just before Alleluyah filling station.

Reports say the mayhem was a reprisal attack by hoodlums from other areas where several clashes have occurred since the new year began.

But some shops appeared looted before the fire as the charred remains of some valuable goods were no where to be found in the morning. Broken bottles and pieces of smashed vehicle windshields littered the main road when Newspeakonline visited the scene.

Eleven suspects have so far been arrested according to the Oyo State police spokesman, Adekunle Ajisebutu, who confirmed the incident.

He said in a statement that the state Commissioner of Police, Abiodun Odude, has directed the policemen drafted to the area to carry out intensive patrol as well as 24 hours surveillance to avoid further breakdown of law and order”

He disclosed that the 11 suspects including their ringleaders arrested would be charged to court immediately after investigations.