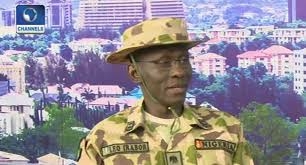 Chief of Defence Staff (CDS), Gen. Lucky Irabor, has revealed that the military foiled plans of terrorists to launch an attack on Abuja and other major cities in the country last week.

Over 40 people were killed when terrorists attacked a Catholic Church in Owo, Ondo State, last week.

Irabor, who spoke on Channels Television’s special programme tagged ‘Democracy Day: Giving Hope To Nigerians’, on Sunday, stressed that operatives averted what could have been the most devastating incident in the history of Nigeria, disclosed that the same type of catastrophe was also averted in Kano State.

The CDS noted that large cache of Improvised Explosive Devices (IEDs) making materials were recovered before the attacks.

”We recovered a large quantum of arms and ammunition and other materials which, of course, the criminals were intending to use in various parts of the country, including Abuja.

”Perhaps, you may not know that just only the same week of the Owo incident, in Kano, for example, given the intelligence available to security agencies, we were able to botch what would have been the most catastrophic incident within our country,” he said.

”That the Owo incident happened does not imply that improvements have not happened. Let me state that this is a process, and if you could take a look at the war stage in countries around the world, you will find incidents of violence and criminality in one way or the other.

“I will say that a lot has happened; there’s been quite a lot of improvement in terms of the armed forces and other security agencies doing all that is necessary to bring peace to the various troubled regions of the country.

“I can tell you that from last year till now, we have had quite a lot of improvement; from the North East to the North West, North Central, South South, South East and South West. Of, course, there still remains a long haul in terms of addressing the nuances that attend to insecurity in Nigeria,”Irabor added.

The CDS appealed to Nigerians to always trust the military and other security agencies for the war on insecurity to be more effective.

“It is for us to have an understanding that we can’t withhold information and expect miracles to happen. Certainly it’s not going to happen.

“I’m a victim as well as any Nigerian that is on the street. We are all victims together. There’s no one who is on the other side. We are in it together. We are on the frontlines. Trust is not something we need to beg for.

“I will seek and crave the indulgence of all Nigerians to say that there has to be trust. Trust must exist and trust must be given in all respect, so that together we will achieve the state of peace that we so desire,” he stated.