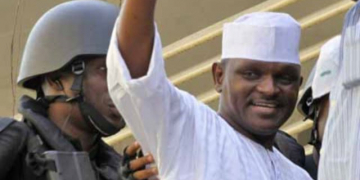 INTERVIEW: Al Mustapha says “lies were told against me”

INTERVIEW: Al Mustapha says “lies were told against me” 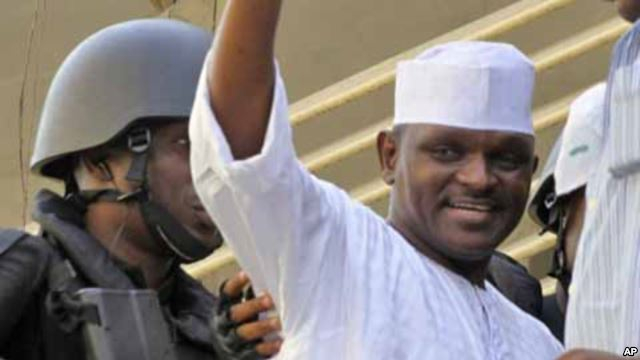 Al-Mustapha spent 14 years behind bars at the Kirikiri Maximum Security Prison, Lagos while facing trial alongside others over allegations of murder during Abacha’s despotic reign.

Al Mustapha, now a free man, had a chat with The Union Newspaper‘s Patrick Osadebamwen in Abuja.

He said lies were concocted to keep him away in prison.

What was the feeling you had when you came out of prison and knew you were out for good?

Really good. Indeed, from the point of view of having freedom and incarceration. When one is in incarceration, you can give him everything. No matter how valuable it is, it means nothing. The most valuable thing in the hand of the man that has lost his freedom, is freedom.

When you were in prison and could not defend yourself, there were stories that you threw people into a crocodile infested water in the villa and in some cases fed people to lions. How did you feel hearing those stories?

First of all, I was extremely disappointed. These were stories that were sponsored by people who are high up. And there are such people who are supposed to be statesmen sponsoring lies in our society. My disappointment has to do with polluting the environment with lies. That is more disturbing. Secondly, as a victim of persecution, it did not start with me. It started with several other people even though I pray it stops with me. But if destiny wants it somebody will continue with it in a similar situation. Then, it is something you cannot stop. Like mine, I was destined to go through it and I did. And then the lies are all phony. It is the same Presidency that we handed over to somebody else. The question is where are the ponds? where are the crocodiles? where are the lions? Who are these individuals that we threw to the lions? They must have families. Have their families cried out? Has any pigeon gone missing?

So you can see; when people want to tarnish your image because of fears, they can use anything. In my own case, I would say anybody who sponsored those things has a whole lot to hide from Nigerians. This is what I know. Mine is to look forward to God Almighty, and to give thanks and praises at all times whether it be good times or bad times. Bad times make you stronger, good times makes you look in retrospect, be thankful and give praise to God Almighty.

That was what I was doing in prison. Praise is in my religion and it is carefully done. But to say that fear of the mischief that was to get us cowed or our spirit dampened can never happen. It can never happen.

Your arrest did affect your career in the Army. Now, do you still have a vision of serving Nigeria in another context?

The very first week I came out, I began doing what I am use to -empowering youth organisations of men and women from the North to the South including youth activities from within west coast which is what I started with. I have been doing this since 1984. Many people do not know this. I have many of these products which I have registered, whom I have sponsored, nurtured to grow actually in key places across the country.

Concerning my career military, that is another thing. That can only be determined when the Supreme Court concludes on the issue. We are not finished yet. That is why I am looking at so many people calling me names. There were those who persecuted us, who were quick at suggesting that we leave the military as quickly as possible because they are afraid. You cannot set fire in the bush and say there cannot be smoke. Of course, smoke is the mark.

What in your view is the worst misrepresentation of your former boss, Gen. Sani Abacha?

Let me react on one issue before I answer it.  When I first learnt of the word loot was in 1999 around November/December when we came to court. I saw all the papers carrying same heading. First, I was shocked and disappointed because I did not know whether that was true or not.

He was ready to die for the country. No two ways about it. No two ways. I worked with him. I saw him through crises time. We went through it in Nigeria at different times. But to see sign of weakness, or doubt, or fear was far from it. And another thing was that he could go to any length for the good of Nigeria.

There are so many instances. On issues that has to do with welfare and wellbeing of Nigeria. The laudable projects he created or policies he came up with that were yielding results for the country speak for themselves. If not that some of such things were halted, by now, this country would have gone beyond where we are now and many of the crises we are having we wouldn’t have come up again. These are the few things I can say now.

During the Oputa Panel, you made statement that ‘Power is like a fatal poison, covered with honey. And corrupt Nigerians are like flies that continue to perch on the layer of honey up until they meet with the fatal poison.’ Looking back, did you Hamza Al-Mustapha at any point became oblivious of this guide?

Even today, if you look at what is happening. It is a new dispensation. And the anti-graft campaign in itself is aimed at actually halting this ugly drift. Those identified and to be prosecuted as the mission is, are some proofs of this fatal poison and honey description.

When they decide to steal they steal heavy. When you are caught, you are still able to deduct a little fraction get it out and you are left, still a billionaire. That is it! If you do not halt it, it may still go into trillions.

I wouldn’t want to call names, but there were people who came and celebrated their first trillion. People applauded them but if you look at who they are and what they are, they were far away from making such money. But they were applauded. In the same country, where people were scavenging to eat. Families are looking for few little Naira to get themselves afloat. So this in itself is nothing but promoting insurgency.

Where you promote mutual suspicion between people, where you know that prior to coming to power you had nothing. After assuming office, you now become a billionaire and supper billionaire and people will look at it and call it normal. Certainly, many things are wrong between the led and the leadership. Such an environment will breed nothing rather than mutual suspicion and breeding ground for insurgency.

The insurgency in Maiduguri started like this; when a group of learned ones came to the fore and said that they are being confronted with hopelessness, they got their certificates burnt in public. That act is not a joke. Government should have rushed and identified what had militated that. Absence of leadership in that sector or that state where it all started probably was one. Probably, the Nigeria that they had revered in their minds, the Nigeria of their dreams but suddenly they started believing that things are not going to work out well. So, they listened to the wrong people, the wrong doctrine swayed them and they came to the fore as militants and continued to fight. Anybody they see, man or woman, they killed.

And there are people, you should know, from the dirty international politics to the dirty domestic politics, whichever way you chose to look at it, who are ready to supply arms and drugs to serve as diversion, while they do what they want. I have many unanswered questions about Boko Haram. I have 212 questions about Boko Haram I think that each of these 212 questions is extremely important. They are so sensitive.

Are answers been provided to anyone of them?