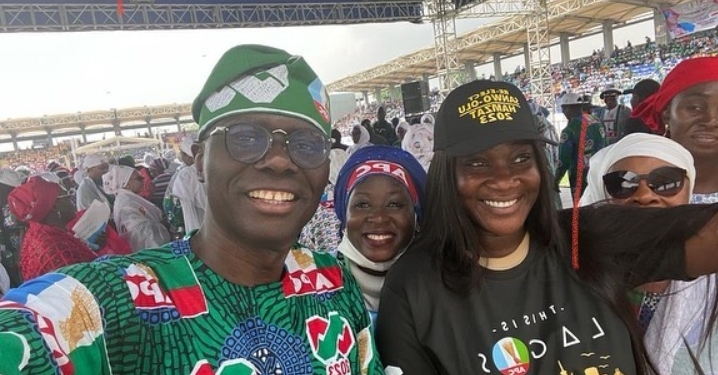 Nigerians have taken a swipe at Nollywood actress, Mercy Johnson-Okojie, for throwing her weight behind the ruling All Progressives Party (APC).

The actress had shared pictures of herself with the Lagos State Governor, Babajide Sanwo-Olu, Senator Oluremi Tinubu and Hajia Nana Shettima at the APC South West Women Presidential Campaign Rally held in Lagos, on Wednesday, on her Instagram page.

She wrote: “I joined His Excellency, Babajide Sanwo-Olu @jidesanwoolu and the incredible women leaders that make up the APC ‘Women Presidential Campaign Team’ at the APC women Southwest Rally.

“As a woman, wife to an APC candidate @princeodiokojie and mother, I am confident in the APC plan for women which is in line with the 35% affirmative action for women.

“From the goodwill messages and conversations with the women leaders, I was opportuned to hear from the horse’s mouth and I have renewed hope and confidence in the good intentions, great plans and actions to follow for the women of Nigeria and for the people of Nigeria.”

However, some Nigerians have taken to the comment section of the post to express their displeasure over the actress’ support for APC.

See some of the reactions below:

bravewearsofficial wrote: “You all just care about money, and no single regard for humanity. It’s a pity!”

immalove38, said: “Aren’t you tired of the damages this APC have caused we the Nigerian people, or have you collect back hand in order to support it, madam u are on ur own.”

Reacting, Kingbellomiltin, said: “If we can give these celebrities massive unfollow guys it won’t be bad. This nonsense has got to stop after what happened at EndSARS, person got mind to still support APC all because of peanuts.”

fannyb_esta wrote: “Stomach infrastructure will not allow you all to see road, after all the suffering this past 8 years you say renewed hope, hope of more suffering from a wicked party. You think you will collect money and insulate your family. God will measure each and everyone of your punishment and the money you collected will not save you. Long throat gang.”

zaki_godwin said:“I say this again You must suspènd your reasoning, Bùry your conscience, Promote liés with straight face, Be, Insensitive Be criminally minded, And most importantly, Be very stoooopick.”

hetypat Mercy also said: Even with the money your husband is spending in Uromi, he will not win. We from Uromi hate APC to the marrow of our bone. Tell your husband Odi to just rest. I know he’s already scared and asking people “what if I loose with all this money I am spending”. Meaning he’s very scared. The day he joined APC was the end of it all, mark this.”

dr_prince2,wrote: “ Shebi una see why una Celebrities are not talking or saying anything about what is happening in Nigeria.. all una Best Celebrity care is MONEY and themselves.”

street landlord1, wrote: “Dem Don force you do assignment wey no come from your mind even your postures on the photographs is your body minus your spirit.”